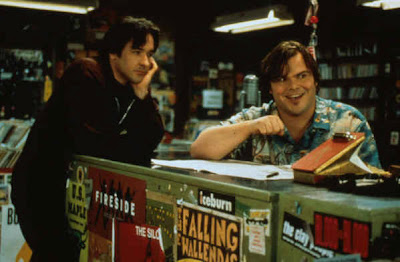 Cannonballer's note: Writing reviews are hard, especially since now that it's started getting really cold here, all I want to do is curl up in bed and watch movies on my computer. I read this a week ago, and am writing it only now, when my memory of it is fuzzy. Not good.

I couldn't say anything about the movie because I have never seen it (yet. Really gotta remedy that situation because I love John Cusack) but holy cow, this book is completely neurotic. The best thing about it is that the main character, Rob Gordon, is completely honest about his neurotic-ness, so it doesn't seem like a big whine fest. Instead, it seems like he is genuinely confused with his behavior around women, with women's behavior around him, and just confused about the type of person that he wants to be.

There doesn't seem to be too much of a plot because most of it takes place in Rob Gordon's head (which makes me wonder how they managed to adapt this into a movie - again, I'm gonna have to see it soon.) Rob Gordon is 35 years old and the owner of a failing record shop. His girlfriend recently left him, and this break-up left him going through all his past relationships and wondering why these girls rejected him. It's interesting to see a guy ruminate so obtusely over his personal life, because a) we usually expect girls to do that (please don't scream "sexism." You know it's true) and b) Rob's actions and thoughts were so incredibly contradictory and myopic.

For example, he would go on and on wondering why girls reject him, then he would insert this innocuous statement about their past relationship, which reveals so much about the way he treated her. I would think, "Well... no wonder." But then he would continue rambling on and on about his rejected feelings, and I'm thinking, "DUDE! You just skated past the reason why she left you, you dumbass." So I veered from being very frustrated at him to completely understanding his point of view. And I think what's authentic about his ramblings is that I've gone through that same irrational thought process. I suppose it takes one neurotic to understand another.

Anyway, I really liked the book, even though Rob frustrated me several times (A good British way to describe him is "thick.") After I was done reading the book, I told my boyfriend about the book and how neurotic he is. I guess I was trying to indirectly ask my boyfriend if his mind operated that way, but to be honest, I'm not sure if I want to know.
Posted by denesteak at 7:55 PM