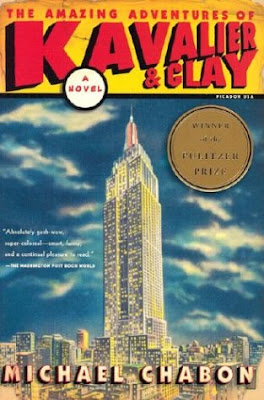 Kavalier and Clay came highly recommended by Pajiba – it's number one on the Best of the Decade's list. Though I went in having high expectations, it did not disappoint. I was a little put off by Chabon's blending of historical writing and narrative writing, but once I got past the changes in tone, I was able to see that it is this mix that makes the story so much more compelling.

Kavalier and Clay are cousins who decide to create their own comic book hero during WWII. Chabon goes into the history of how the comic book hero came from the newspapers funny page, and how it has evolved to become its own genre. The Escapist, the costumed hero that Kavalier and Clay think up, is sent all over the world to fight Nazis, which was a pretty popular topic since this was in the middle of WWII.

Josef Kavalier, a Jewish Czech who escaped from Nazi-infested Prague, is intense in his ambition to "defeat" the Nazis through his art. He wants to get enough money so that he can bring his family to America. Sammy Clayman (shortened to Clay) has lived in Brooklyn all his life and is kinda the brains – and he definitely has the imagination for it – to the Escapist's adventures on their pages.

While reading this, it seemed like a fairly straight-forward plot: two boys want to get rich getting into comics; Josef falls in love, Sammy does not; tragedy happens, and the fall out is in the final third of the book. However, as I am trying to organize my thoughts about this, I really don't know if I can get to everything.

Kavalier and Clay is about being young in America when the possibilities are endless. That may sound like a good thing, but it really can go both ways, and for both characters, it does. The Escapist becomes extremely popular - yet the boys' wages are peanuts compared to what the publisher is getting; Kavalier may have fallen in love, yet he feels guilty about his happiness when he thinks of his family in Prague; and finally (this one broke my heart) Clay finds someone he loves, and in the end, decides that it's better to be alone than to ever get hurt again.

What I love about it is that Chabon doesn't make it an easy route for both our heroes. Neither of them really stumble back into their happy periods - it's almost arduous and painful to read the middle part because I kept hoping and hoping that everything would turn out all right. But I think that's also what I really like best about the book.
Posted by denesteak at 8:10 PM

i have to go back to this one. i got about 2/3 of the way through and didn't finish. but i was enjoying it. i don't remember wh i put it down but it had nothing to do with the book and i definitely need to get back to it. i remember it did take me while to get into it but once i did, it was so good. why did i stop?

yea it definitely took me a while to get into. I really thought it was strange how Chabon was mixing a "history book" tone of narration with a "adventure lies ahead!" narration. But I think all the stuff about the Golem and smuggling Kavalier out of the country really drew me in and I was hooked afterwards.