Cannonball Read #21 and #22: The Graveyard Book by Neil Gaiman; The Jungle Book by Rudyard Kipling 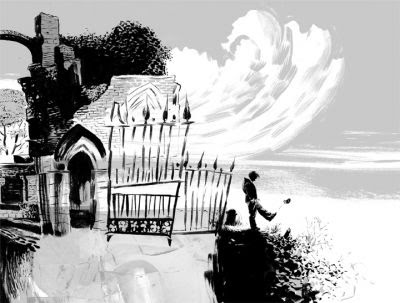 Oh Pajiba, how I love thee. Just for you, I bought a hard-cover book so that I could read it for the Book Club discussion. It usually takes me ages to actually put down cold, hard cash for a book, especially for one whose spine is stiffer than my own.

Lucky for me, The Graveyard Book was an awesome read. I literally devoured the pages (and yes, I used "literally" correctly because I was coughing up paper for days after) (ha ha, lame joke, just kidding - just wanted to annoy you grammar freaks) and finished it in a night, and after I was done, I was so sad. I wanted to know more about Bod's guardian, Silas, and I wanted to know how Bod got on in the normal world.

Nobody Owens, Bod for short, was raised in a graveyard by its ghostly residents. When he was a baby, he crawled into the graveyard in the night, pursued by a man who had just murdered the baby's family. The Owens, who have been dead for a long time, took him in as their own, and appointed Silas as his guardian. Silas is someone who belongs neither to the human world and the ghost world and is seen as very knowledgeable.

The entire book is basically about Bod's very special childhood, what he learns, and what he can do. I really liked the progression of how he went from being a child who asked a lot of questions to a teenager who was willing to stand up for himself and accept his differences as a part of himself.

Anyway, since this book is modeled after The Jungle Book by Rudyard Kipling, I picked it up next. I don't remember the Disney cartoon, so this was pretty much a fresh impression for me. I think I made the mistake of trying to see the similarities because even though the general structure is the same, the story is quite different. 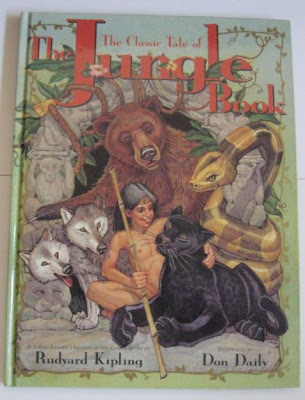 Mowgli is adopted by a pack of wolves in the jungle. His family of wolves refuse to give him up to the lame tiger who hunts him. The tiger had to give up Mowgli when the wolves took him in because he knew that he would not be able to defend himself against a united pack.

I thought it was interesting that Kipling gave the jungle a set of rules that all the respectable animals felt they had to follow. For example, most of the animals don't believe in eating humans because they are the weakest creatures and cannot defend themselves. The wolves also scorn the lame tiger because he attacks cattle and they are slow and not much of a challenge. Monkeys are often ignored because they do not have a code to follow and therefore are not considered worthy of attention.

Mowgli's story was only for half the book. There was also stories of other animals, like a snow white seal that roamed the oceans for a perfect spot to raise a family, a shore that no humans have ever touched. I also enjoyed the story of the mongoose that defends a human family from the cobras living in their backyard.

I do sincerely wish that I had read The Jungle Book when I was younger though. It's a very straightforward book, in terms of the character development and plot. There are also rhyme verses at the end of every chapter, so I can see myself enjoying that immensely as a kid – whereas now, I would want to rush through those. I'm glad I have read it, though (and I know it's almost criminal to say this) I think I enjoyed The Graveyard Book more. I liked how dark it was, and also how Gaiman once again touched upon his oft-used theme of personal growth and acceptance in the character of Bod.
Posted by denesteak at 8:51 PM

I got neil gaiman's graveyard book
as a christmas present from a friend
two years ago. somehow, I've still
yet to read it...

Read it! It's great!

will do when I have the time (:
how have you been?

really sorry we didn't get a chance to meet up the last time you were back. ):

dene, you are constantly reading all the books i either ant to read or reread. graveyard book is on my list. i think what i'll do at the end of june is bring a duffel bag to work and just fill it with books to read over the summer.
also, thanks to you i now want to read the jungle book. and re-watch the cartoon which is so fun. "the bare necessities of life".