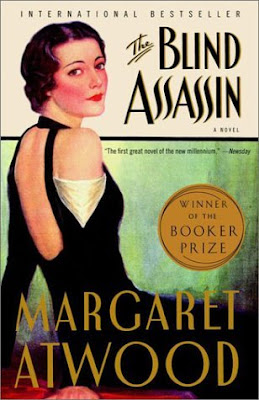 This was Jen K's selection for the Pajiba Book Club, and my second Margaret Atwood novel. I finished it last night and have had a little bit of time to think about it. Though I don't think I really liked it while I was reading it, I've decided that it's really very well-done and I like it better now that I've reflected on it a little bit.

Atwood has basically three stories layering upon each other. The first is a memoir of sorts by Iris Chase, now an old woman looking back at her life. The second story comes from excerpts out of a book, "The Blind Assassin," which was written by Iris' younger sister, Laura, who died 50 years earlier. And the third story comes out through following the inner monologue of Iris as she mulls about her current, old-age life. Inserted randomly throughout are clippings from newspapers and society tabloids which show what happened, at least according to the public's perspective.

Though Atwood's writing is beautiful, and she has some really interesting and masterful turns of phrases, it was really difficult for me to get into the beginning of the book. Iris Chase writes about her family history, and the upbringing of her and her younger sister, Laura. They are from a wealthy privileged family in a small Canadian town, growing up pretty much ignored by their parents since their mother died when they were younger and their father is too busy/stressed out/oblivious because of his work. I actually got kind of bored reading about Iris' childhood because – even though there are some telling things about the two girls' personalities that would later resonate in their adult lives – they really didn't do that much besides study with their tutors (one of whom liked Laura in a Humbert Humbert way) and get boss around by Reenie.

In contrast, there is "The Blind Assassin," written by Laura and published after her death, which was what I really enjoyed in the beginning. Two lovers meet in secret, and after the sex, the man tells the woman a made-up story of a beautiful city called Sakiel-Norn where the wealth comes from beautifully weaved carpets, all of which are made by child slaves. Their small hands can better manipulate the loom, and these children are worked so hard that they are usually blinded by this trade at a young age; after which they are sold off as sex slaves to brothels, where their "suave and deft" touches are of high demand. They are also good at picking locks, and those who manage to escape become hired assassins, slitting throats in the dark.

The stories the children whispered to one another – while they sat weaving their endless carpets, while they could still see – was about this possible future life. It was a saying among them that only the blind are free.

Come on, isn't that awesome? If it was reality, not so awesome; but as a story, or a story within a story, this premise is just so attention-grabbing and interesting. Very, very unlike the childhoods of Iris and Laura. Luckily for me, Iris' and Laura's story gets better (or worse) as they grow older, but I'm not going to give away any spoilers.

Instead, I will talk about some of the issues I had while reading it. One of the harder things for me to do was to listen to Iris' drone on and on about the daily on-goings of her life (but you already know that) and at the end of it, she would write something like, "But there is something I left out here. I know I am not telling you everything." (I'm paraphrasing, not quoting her.) And it's clear, when you get to the end, that she's left out plenty.

On the one hand, I like getting the surprise at the end (though I figured it out halfway through what happened and felt pretty good about myself when I confirmed it by searching for spoilers online.) However, I'm also the type of person who likes to know what's going on, and without the palpable tension or the promise of impending "drama" (for the lack of a better word), I was seriously ready at certain parts to just take Winifred's opinion that Iris was kinda a dumb, young girl who married rich. Though Winifred, who was Iris' husband's harpy sister, was just a dreadful person, and I say this even though I know we only see it from Iris' perspective.

Another thing I disliked were both Iris and Laura. As young girls (as described by Iris) they barely seem like real people, only caricatures of rich white girls. Iris does as she's told and doesn't really say or do anything; Laura is sanctimonious, has her head in the clouds, and is trying to prep herself for a life of martyrdom, which might have also been why things ended up the way they did.

I think - no, I'm sure Atwood did this on purpose. At least for Iris, Atwood made it seem like she had no personality on purpose, just to show how little people cared back then about a woman's real personhood. (Laura was just fucking annoying.) There was one point where Old-Age Iris said that though she is the same person, body-wise, there is no way she could recognize the young Iris as the same self as present Iris. I'm nowhere close to being described as old, but I can certainly understand that sentiment when I look back at my self from ten years ago.

I also hated that these two sisters refuse to stand up for each other. There seemed to me to be a lack of love between them. They tolerated each other, and they loved each other out of obligation, not out of love or need. In the end, to me, this entire novel wasn't about two sisters and their family drama and how this dramatic familial love (I say this while rolling my eyes) resulted in this epic dysfunction. It was really about how Iris quietly coped with her inner struggle during her youth, and how her repression of her self led to her downfall. This is similar to Laura too, who in the beginning seemed like she would bravely do whatever she want and defy societal standards, but in the end was just like every repressed female during that time: sewing her mouth shut while allowing/watching injustices being inflicted upon herself and her sex.

Man, this book depressed me. I'd like to also clarify that while Iris left out loads of helpful narrative bits (palpable tension, as I said above) in her "memoir," she certainly portrayed her bleak future very, very well. I never once thought she was going to end up in a happy place.

Yeah, Laura annoyed me quite a bit this time around. Maybe it was also because I was on Iris's side, but I just wanted to tell her to stop planning her life around some guy she had only seen once on the street corner in the past ten years.

another one to reread. and it's on my bookshelf at home. i think i had a hard time with it originally. and i barely remember anything. i am so envious of people who remember most of what they see, read, hear. i need it at least three times for it to stick.