Cannonball Read #24: The Angel of Darkness by Caleb Carr 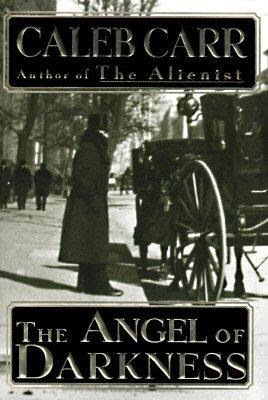 I picked up The Angel of Darkness after several people said that it was a worthy follow-up to my earlier Caleb Carr book, The Alienist. And I have to agree - in some ways, it certainly is. The Bad Guy (or should I say, Bad Person?) is definitely more interesting than the serial killer in The Alienist, and because she is a woman, there is a lot of talk about the feminine mind/psyche.

This time, the investigation is over the missing young daughter of a Spanish diplomat (Historically, Carr puts this right before the the Spanish-American War), Ana Linares. The husband does not want the wife the pursue the case because he is worried it might inflame the already-tense relations between the Spaniards and the Americans. So the wife goes to Sarah Howard, who has opened her own private detective firm for women, and asks her for her help.

Naturally, she recruits all her old pals for help. There's Dr. Kreizler (The Alienist!), John Moore (the journalist who's kind of a petulant child in this book), Marcus and Lucius (the Jewish detective-brothers who are a great help in the forensics department), Stevie Taggert (the young boy that Dr. Kreizler rescued from a life in jail, and Cyrus Montrose (servant of Dr. Kreizler, friend to all, good pianist player.)

What sets this second book apart from the first is that we know pretty early on who kidnapped Ana Linares. Libby Hatch, a woman who is described by John Moore as him not knowing whether if she wanted to "kill me or fuck me," appears to be a caring hospital nurse and kind mother, but the group suspects her of kidnapping and murdering young children. She is confronted near the beginning, yet the group cannot figure out where she has hidden the child. Once they figured out that this was probably not her first foray into infanticide, they decided to look into her past to see whether if she has had missteps before, and then bring her to justice for her past crimes. The last half of the book takes place in upstate New York, which is where Hatch was from before New York.

If this sounds like a very roundabout way to get to baby Ana Linares, then you would have an inkling as to how I felt reading this 600-plus page book. Yes, the villain this time is much more interesting, but there were parts that I felt Carr was trying to drag out. The book seemed to follow the same format (in terms of the detectives investigating the case) as The Alienist, and because I could sense the similarities, it frustrated me.

I should also add that though the first book was narrated by John Moore (petulant boy-man-journalist), this one was seen in the point of view of Stevie Taggert, which I felt was much more interesting. He is very close with Dr. Kreizler and is able to offer some insights on Kreizler, who is a bit of an enigma. Stevie is also able to talk frankly with Sarah, and observe the childish, easy rapport between everyone in the group.

As I said earlier, since the villain is a woman, there is a lot of discussion about females roles in American society. It's interesting to see how all the main characters react to some of the psychological theories (and this is where Carr just seems to reuse his script, in my opinion.) Dr. Kreizler would "humph," and say something about how none of his colleagues have anything extensive written about it; Sarah would say something insightful and then brandish her derringer just to show how she's such an avant-garde female; John Moore rolls his eyes and says things like "But a woman would never do that!!"; and Marcus and Lucius are always at the side arguing over some forensic detail.

Meanwhile, I read this all and think, "This 1800s female stereotype doesn't really apply anymore, and for that I am so glad for myself." I'm still not sure whether if the stereotypes are a fault of Carr's or just him trying to show that era's myopia about women. Obviously, the latter since Libby Hatch is the villain, thus proving the stereotypes wrong - but all of that (over-)explanation can really be taxing to this modern female.


PS. Why does Carr allow his publishers to choose such dreadful, unappealing book covers? I can go with the black-and-white and the non-sequitur Man Standing Ominously By The Carriage image - but does it have to be so fuzzy and grainy?
Posted by denesteak at 2:26 PM