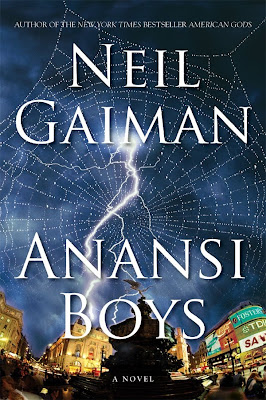 I know that Anansi Boys is somewhat connected to American Gods in terms of mythology, but I think that's about where the similarities end. Though there are some familiar faces, I was still able to come to this with a clean slate of mind.

Fat Charlie Nancy has spent most of his adult life avoiding his father because he is constantly embarrassed by him. But when his father passes away abruptly, Fat Charlie has to return home for the funeral. There, he finds out from an old family friend that his father was Anansi, the spider-god or a god of mischief, and that he has a brother, Spider. Spider is charismatic and lucky and handsome; but he is also trouble. Fat Charlie invites Spider into his life, but then promptly wishes him out. However, Spider cannot seem to take no for an answer – he has probably never had anyone refuse him anything. So Fat Charlie decides to appeal to the other gods, gods who hated his father for his history of trickery, to help make his brother go away. Personally, I did not think Fat Charlie seem particularly smart.

That's basically the first third of the book. One of my favorite things about reading Gaiman is that I never know the twists he's going to take, and then he surprises me even more when he makes it all fit organically into a she-bang ending. All the threads of an event go off in multiple directions, yet they somehow end up in a climatic finale that does not feel forced. Anansi Boys – and now that I think about it, American Gods did this too – really makes me wonder how large a role Gaiman wants fate to play in his stories. In American Gods, it was implied at the end that the Gods had planned for the whole entire thing to go down (I'm being vague on purpose here). But in Anansi Boys, it's not quite so clear whether if Anansi had any idea about the shenanigans his sons would get into after his death. I liked that the gods were not quite so all-powerful this time around, and that there were other minor players that actually propelled the story forward.

Anyway, I really shouldn't compare this to American Gods since it's so different. One thing that I've really started to appreciate about Gaiman is that he really lets his readers draw their own inferences. He doesn't try to emotionally manipulate us - which is nice. However, the downside of it is that Gaiman's writing can seem a little bit cold at times. I sincerely think he's good, and I have a great time reading his books (I've read more Gaiman during the Cannonball Read than any other authors.) But I can't seem to muster up as much passion for it as when I think about any of Steinbeck's books – who incidentally, does occasionally try to manipulate his readers, so I guess that tells you how much I know what I want or like to read.
Posted by denesteak at 9:38 PM