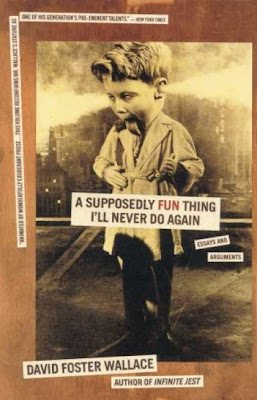 The cover of this book really put me off. I know we are not supposed to judge by the cover, but it was equally creepy and hilarious. Plus, I don't like scary-looking children (I actually keep the book face-down so that I didn't have to look at that white-eyed kid.)

I guess it's in that way that cover is a brilliant indicator of this book. I've never read anything by David Foster Wallace, so I didn't know what to expect (scary children who get angry?) - but the collection of "essays and arguments" really went the range of laugh-out-loud-in-the-subway funny to downright depressing. And they were all creepy because Wallace put to words my thoughts about people that I would never have realized could be voiced if it weren't for him.

My two favorite essays were "getting away from already pretty much being away from it all" and the title essay. In GAFAPMBAFIA, Wallace is writing an account of the Illinois State Fair for Harper's magazine in New York. He regularly veers from shock/awe at the lifestyles that rural Illinoisans lead (Wallace decides during the farm stock judging - where cows, horses, pigs are showed off and prodded - that one can probably get a PhD in just cows based on how much was discussed during the proceedings) to just unadulterated appreciation (he was a very big fan of the Prairie State Cloggers Competition. A quote: "This is far and away the funnest, most emotionally intense thing at the Fair. Run, don't walk, to your nearest clogging venue.") Wallace grew up in Illinois but I guess he repressed a lot of the Midwestern likes/dislikes/general daily habits, because being at the State Fair had him analyzing them like a sociologist who was just let out of solitary confinement. Wallace was also accompanied by a childhood friend he named Native Companion who seemed to scoff at all his high-falutin' East Coast theories.

One of my favorite scenes comes after Native Companion was tossed and spun in a crazy ride called The Zipper, and the carnies kept staring as her dress went up over her head and making lewd comments. Native Companion came off the ride completely exhilarated ("That was fucking great. Joo see that? Son bitch spun that car sixteen times, joo see it?") and Wallace kept asking her if she minded that the carnies hung her upside down just to see up her dress, or that they were basically oogling her the entire time. He wonders if it's regional difference whereby Midwesterns appreciate fun but on the East Coast, the "politico-sexual indignation is the fun." He continues to expound on it despite her request for him to "buy me some porkskins, you dipshit."

Anyway, GAFAPMBAFIA really had me giggling but what really impressed me was the title essay. It takes up about a third of the entire book, and Wallace is on yet another fish-out-of-water trip. This time, he's getting paid to write about his time spent in a luxury cruise liner that goes from Florida to the Caribbean. Wallace is definitely the odd one out at the ship (his East Coast sensitivities and all) and most of the essay is focused on how he is troubled and constantly bombarded by the fact that the cruise's staff were willing to fulfill his every whim. Another thing that disturbed him was how all of the cruise's brochures, announcements and constant organized fun on the ship was like parent telling a child, "You will have fun whether you like it or not."

What interested me the most were his ruminations on how the staff must really feel about constantly having the Professional Smile and trying to give the guests over-the-top-notch service. Wallace states it pretty early on when he tried to take his own duffel bag from a pile of luggage to bring to his room, and was stopped by a porter requesting to carry it for him. He said that it was not necessary, and dismisses the porter's zealousness, "high-pitched protests and his agonized expression as mere servile courtesy." However, Wallace later finds out that the porter was chewed out because a guest was seen carrying his own duffel bag, and it was such an assault to the cruise's "Guests must be pampered!!!" theme that an officer later came to his room to assure him that "ragged-necked Lebanese heads were even at that moment rolling down various corridors in piacular recompense for my having had to carry my own bag." Wallace ended it saying it was his fault and asking the officer to promise not to fire anyone. Wallace wrote, "...the whole incident was incredibly frazzling and angst-fraught and filled almost a whole Mead notebook and is here recounted in only its barest psychoskeletal outline."

I mentioned earlier that there were very depressing parts to this book, and so far I've only recounted the funny ones. I'm not sure if there is anything specific that I can remember, but it's definitely Wallace's voice that depresses me (which I guess makes no sense since I said he is funny.) He's extremely neurotic and sensitive, which is what puts him in these funny situations (There's a really funny story about how he was convinced that the cruise has people following him because every time he leaves his room and comes back, it's been cleaned by the maid, but he never catches the maid) But there were times when he was describing the cruise and its guests, and I was nodding along thinking, "Exactly!" and then feeling bad because I thought, "If I was on the cruise ship, would I really wanna be caught up with how ironic/hypocritical/funny everything is, or would I wanna enjoy myself?" I don't think it helps that I know he killed himself and it depressed me that I agreed – nay, identified with him.

Anyway, if you're going to read one story out of the collection, read "Supposedly Fun Thing." I myself skipped the giant thesis on television and on Michael Joyce's tennistry. I got 20 pages into the TV essay, realized that there were 20 pages more, and just flipped to the next story. I did enjoy the first story about Wallace being a tennis idiot-savant as a teen. All in all, I was really impressed by him and his writing style; I even appreciated all the footnotes he had. He made me want to explore more great, stylized writing just to see if I can develop a style of my own.
Posted by denesteak at 4:24 PM