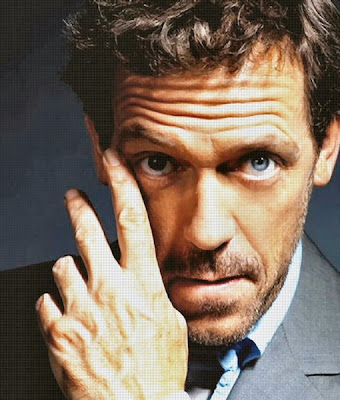 This book is a bit of a cheat for me because I've actually read it several years ago. I think I bought it at an airport because of Hugh Laurie, read it during my flight, and then promptly misplaced it. When I saw it at the library, I decided to revisit it since I really don't remember much about it.

So I'm happy to say that it's just as satisfying a read the second time around. Laurie's voice is very humorous and dry throughout the novel so even at the high-intensity parts, I was still smiling to myself. His hero and narrator, Thomas Lang, seems like a pretty ordinary guy except for the fact that he's a total bad ass; Laurie writes him as so nonchalant a character that every time Lang manages to squeak past trouble, even he seems surprised at his own skill and luck.

Though there seems to be a twist in every chapter, I think this book is definitely more character-driven. We rely a lot on the narration of Lang to keep us focused on the details of his situations, and it's such a good thing that Laurie, and therefore Lang, is hilarious. If not, I think the plot might have been a little convoluted.

It begins with Lang being offered a job to assassinate a rich American industrialist. Being a good man, he refuses, and then decides to take the further step of warning the American industrialist of the assassination. From there, he falls into a giant international conspiracy that involves the CIA, MI6, and an evil billionaire whose name sounds like "murder." Lang is pulled into this because he seems to be a hopeless and hapless romantic, in love with the beautiful daughter of the American industrialist. Yet he also seems unable or unwilling to stop the proverbial wheels from turning, and is just swept along for a long, fast-paced ride where he's beaten up on, shot at, forced to take on and shed identities, improvise on a high-speed swerving motorcycle chase, and maybe partake in the occasional sexy time with a femme fatale. It is to Laurie's comedic credit that Lang is able to eke out the sarcasm and wit during this insane plot and still be believable as a character.

I wish I could end with some quippy quote from the book, but I feel like I would be short-changing the humor so inherent throughout the entire novel. If it is possible, Laurie's comedy on the page is just as successful as his performances. It also helps that I kept picturing House (Yes, Gregory House, not Laurie), except less of a curmudgeon, as Lang – which made for a very pleasant read indeed.
Posted by denesteak at 10:11 PM