My week thus far in pictures...

On Tuesday, I went to Bryant Park after work to unwind with my crossword. I had this mental image of myself lying sprawled on the lawn with all the reflective buildings gazing down on me as I raced through the empty boxes with my pen, finishing the crossword before dusk. In my Bryant Park fantasy, I was intellectual and content.

The reality: The lawn was closed so I sat on a hard, butt-numbing wooden bench with no back. I was almost stung by a bee. A couple sitting in front of me seemed to think that they were in a cheap motel room. I gave up on my crossword early – I'm not even smart enough to get through Monday's very-easy edition – and almost fell asleep doing it because 3:30 a.m. was the time I went to bed the night before. At least I got the "reflective buildings" part right. 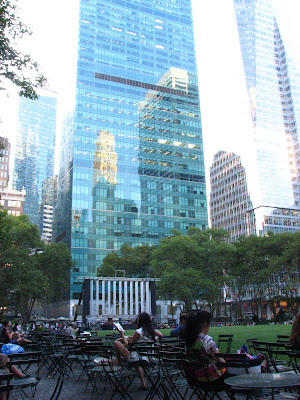 On Wednesday, I decided to go to Central Park to try and catch the Black Keys on SummerStage. I didn't have tickets to the concert (that would have required spending money) nor did I really have a plan. I tried to get someone to go with me but no one really wanted to stand outside a concert venue looking in, trying to get a glimpse of a band they don't really care about. So I went by myself. I found a giant rock outside the concert area that had a ton of people on it and there was a spot on it with a clear ("clear" is a relative term) view of the stage, so I was just perched there. This would be the second day in a row that my butt lost feeling.

I don't have a photo of this, so this will have to suffice: 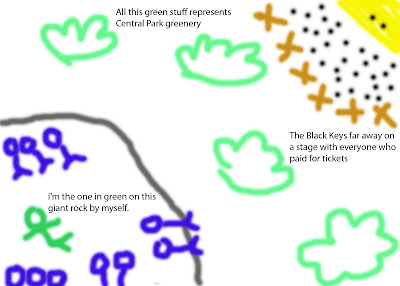 I actually didn't think it was that weird for me to be there by myself, but other people did because they asked me why I was there by myself. I had zero expectations for this, did minimal planning, and in the end felt blessed that I was able to hear everything, much less see 'em. 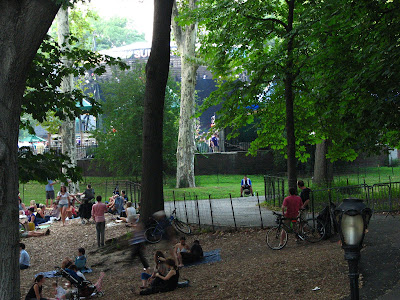 They sang a lot of stuff from their new album, which I don't really know but it was still really good. Toward the end, they played "Your Touch," and it was great. I don't usually go to concerts because I just don't really know music, but when I do know and like a song at the rare concert that I attend (peer in from outside of), I feel like the band is playing that song just. For. Me. It feels fucking awesome.

All in all, The Black Keys rocked, even from a distance, and I think next time I'll actually shell out money to see them.

Finally, I saw this today: 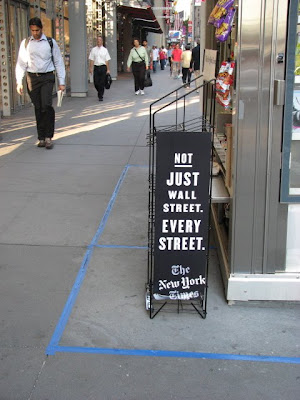 Media rivalries always strike me as petty, but they are also hilarious. Probably because they are so petty. Although, this message probably would haven been more effective if it wasn't parked right outside the Times building. "Ooh, yea, you really told 'em, NYT."
Posted by denesteak at 1:33 AM

I suck at crosswords. I don't even imagine myself completing any of them, I am that bad.

I seldom finish them, but I like to hope!