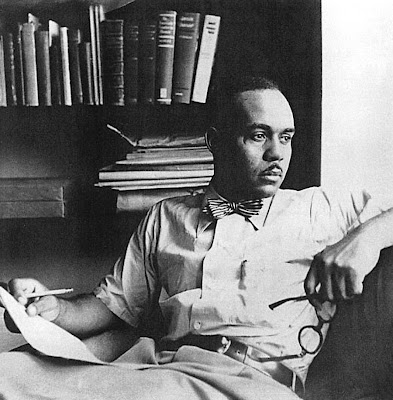 This review is so over due and it’s for a book that is really difficult to describe, so it’s not going to be very good/clear. I read this for the June book club but didn’t finish it until much later. I had previously read it in high school and though I found the use of language to be formidable, it started feeling like a slough toward the end. Reading it this second time around, I had the same problem. However, I think I was able to get more from it this time than before.

Most people have read this so I’ll go over the synopsis very briefly. Our narrator starts out by telling us about where he is and telling us that he is invisible. The entire book a recount of his journey from the South, where he is from, to his underground home in New York. In the beginning, our narrator is willing to just follow authority blindly despite how degrading and menial some of his tasks are. He inadvertently gets into trouble in his college and moves up to New York to find work. In New York, he becomes a part of the Brotherhood, an organization that, on the surface, seems to be fighting for equality for black people.

Reading back on what I’ve written, I realize that reading Invisible Man gives me more of an emotional journey than something that is tightly based on plot development. That is not to say that the plot isn’t interesting – it is. But I cannot really recall specific events happening. When I think about the emotions and realizations that the narrator experienced, I am able to tie that to an event. I remember the disgust I felt at the narrator in the beginning when he was unable to see how he was being demeaned by being asked to participate in a boxing match in front of screaming, rabid white people. I remember the frustration I had because he wanted so badly to please Mr. Norton, who did not even consider black people to be their own individual selves, but were instead “his destiny.” I also remember the slow creeping shock I felt when Jack tells the narrator that the goal was to keep the people of Harlem under the Brotherhood’s control, and all their work was performed under the guise of empowering the black men.

Though I wanted to give up on it many times (since the book club discussion was over), I’m glad I made it through. There are some things that Ellison make very self-evident – like all the overt motifs of darkness and blindness – but other themes and characters are not so easy to understand (Bledsoe, and what he represents, simultaneously outraged and intrigued me.)

I guess what I’m trying to say is that I am thankful that Pajiba – or more specifically, Snuggiepants – made reread this even though I started out not wanting to.

Image taken From The Vault.
Posted by denesteak at 8:07 PM

i read this once in college (oh so so long ago)and barely remember the plot, but i recall how surreal it seemed, like a dream (or a nightmare?). you're dead on describing it as an "emotional journey". definitely one for me to read again in the future.