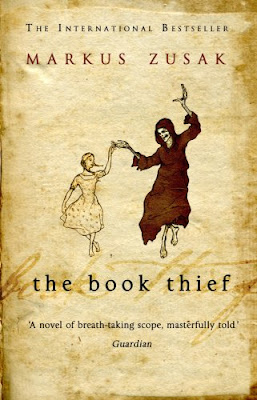 I went through The Book Thief so quickly, just zoomed right through it and it completely broke my heart in the end.

Narrated by Death, the story traces the life of Liesel Meminger, a young girl living in Nazi Germany. Death has met Liesel three times in her life, starting with the death of her little brother as they were being trucked to their foster parents in another town. Stopping at a nearby town to bury her little brother, Liesel managed to snatch up a book from the young undertaker filling up the small grave. The book is The Grave Digger's Handbook. Her foster father teaches her how to read the book during the night whenever she wakes up from her nightmares of her little brother dying. During the day, Liesel plays with her friends, especially with Rudy, who is in love with her. Her foster family are also hiding a Jewish man in their basement who eventually becomes Liesel's friend.

I'm really not sure what else I can say about this. Nazi Germany is seen in the point of view of a young girl. This means that we are able to feel her joy when she gets to joke with her friends or when she reads a book; it also means we feel her pain when she loses those friends and her family. Liesel is easy to identify with, but there were points when I wished I could be more removed from her emotions.

Death also has no qualms about telling you how the story ends. He makes it clear in the beginning that it's not about the ending, but about how Liesel, and us readers, arrives there. This sounds cliche, but though I knew what was going to happen, I was still deeply affected when I got to the event. Zusak had me wishing that Death would be lying about certain things, even though I knew that there was no "trick ending."

Posted by denesteak at 8:17 PM

You definitely did a much better job of putting your reactions together than I did. I really liked the book but then when it came to the actual discussion on Pajiba, I didn't even know what to say. I also really liked that line you quoted, and the other one I liked was "humans haunt me."

when this came out, the buzz in the library world was so huge. of course it was on my to-read list and then i somehow forgot about it. thanks for reminding me.

ps - have you read The Hunger Games? i love this book (could not put it down), as well as the second book, and the third book just came out this week. it's YA action/adventure with an amazing heroine and a heart-thumoing plot.

Jen K., I feel like my reactions didn't do the book justice, but thank you.

Blak, I'll check out The Hunger Games next, thanks! I need a new Lyra Silvertongue in my life.