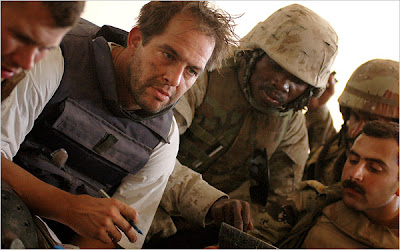 When I was in college, I took an international reporting class taught by this unforgettable woman. She began her reporting career by covering the Yugoslav wars in the 1990s, and has since traveled all over Europe and the Middle East as a freelance journalist. I remember her recounting a story about getting caught in crossfire and catching a bullet on her leg while trying to interview a dictator. They kept telling her that she had to leave, get out of there, take care of her leg – but she insisted on completing the interview because she was worried she wouldn't get the chance anytime soon. The only reason why the dictator even answered her questions was because he was so impressed by her, she said.

Though I admire the career that my professor has and thought she was a fantastic teacher, there was absolutely no doubt in my mind that she was nuts. And that was what I kept thinking while reading The Forever War by Dexter Filkins. The man is an amazing reporter and writer, and I am crushing on him so hard right now. But he has to be so incredibly fucked up to be able to do what he has done for so long.

Picture a soldier who comes home from war and who has lost soem of his friends in battle. He probably has some form of PTSD and is, understandably, withdrawn from his former life. What Filkins experiences seems so much more insane and unfathomable. Not only is he caught in its crossfire, he has to put himself at an emotional distance from the deaths and mayhem so that he can write about it for the paper. Filkins may not be shooting anyone, but he's certainly seen many people go down, and he has even had a soldier die because of him. He has come so close and escaped death so many times that he sometimes has a dangerous sense of recklessness. During his moments of arrogance, he believes that he is invincible – he will never be shot down/snipered dead/kidnapped for a ransom.

The craziest thing? Filkins is able to gather all these memories and pull them together into a beautifully moving account of one of deadliest wars in our recent history. If you have read any of his pieces for The New York Times, they are often very straight-forward, journalese articles of who, what, when, why. This certainly exists in his book, but the gravity of the war is enhanced by how very human all the players are. The marines that he and his photographer, Ashley, followed in Falluja; the insurgents who never quite know how to handle an American who is not in the military; the people who plead to him to tell their stories; the suicide bombers who might not have known what they had signed up for; Filkins' Iraqi translators and drivers, caught between their world and their work, who have saved his life more times than he can count – I read it all with a knot in my throat.

This has been the most affecting book so far during the Cannonball Read. Each time I got to my stop while reading it on the train, I always felt like I was being slapped, jolted into full-consciousness. How is it that the world I live in is real, and thousands of miles away there can be people fighting and dying and hurting and pleading – and that's real too? The disconnect is just too great.

(PS. The New York Times Magazine published an article that was adapted from book, if you're are interested in taking a look at it.)

Photo Ashley Gilbertson for The New York Times.
Posted by denesteak at 11:08 PM

I think I'm going to have to pick this one up - I'm always hesitant about war related books because I'm afraid most people writing them are going to be super conservative and unquestioning about everything, or they are going to be super-liberal and just paint the soldiers in a negative light. It can be kind of awkward being a liberal in the military sometimes.
I trust your judgment though, so I will definitely keep an eye out for this.

One thing I really liked about this book (and I tried to put it in the review but took it out in the end) was how there was a lack of politics in it. There's politics like you learn about the Shiite and Sunni clashes, but you are not looking at what's happening to the troops in Iraq through a liberal/conservative lens.

The book is really, really good. Read the NYT Magazine piece! Those are parts are in the book!