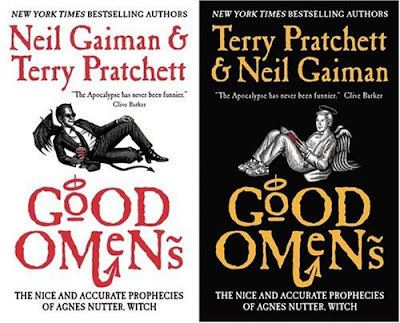 (I've decided to create a "Neil Gaiman" tag for my posts since I've read so much of his work.)

I read "Good Omens" close to about a month ago, and the details are a little hazy in my brain. I am, however, really glad that I actually bought the book, because I can go back and reread it. This book was so much fun to read, and parts of it had me guffawing on my morning subway ride to work. "Good Omens" is definitely my favorite Gaiman so far, and the fact that it is a collaboration with Terry Pratchett is not lost on me.

The story is about an on-coming apocalypse brought upon by the Anti-Christ, who was raised as a human boy on Earth by human parents, and an angel and demon's race to stop it. No, not really - it's more than that.

It's also about the prophecies of a crazy-accurate witch, Agnes, from the 1655 and her descendant, Anathema, trying to interpret the crazy babble about the circumstances of the apocalypse. She meets the descendant to the witch-hunter who killed Agnes, and (as it is already written in Agnes' prophecies) starts developing fuzzy feelings for him. But it's not just that.

It's about the friendship between an angel and a demon who actually both quite like the world they live in, and do not wish for it to be destroyed. So they start giving the young Anti-Christ a balanced education of both good and evil, so that he will be persuaded to not destroy the Earth. Too bad they got the wrong boy - he's as normal as can be, except for the fact that he can probably now recite some really strange nursery rhymes. Aziraphale and Crowley's friendship was some of my favorite parts of the book. They were sarcastic and acerbic and wonderfully real to each other.

It's about a young boy named Adam who loves the town he has grown up in and loves his friends, family and life - that when given the chance to taste enormous power, he decides to do the very grown-up thing of just sitting back and letting his parents ground him.

Finally, it's about never being able to plan something as specific as life and death, especially if it's for the decimation of an entire world. Something/demon/angel/child is always going to come along and fuck up the plans for boom-boom wars.

As you can see, it is very difficult for me to write a coherent synopsis of this book (and not just because I waited a month to write it). It's mostly hilarious and partly sad, and there are also some very interesting ideas about fate here that would probably only give me a headache if I think too hard about it. This is definitely one to reread, if only just to see if I caught all the jokes and details.
Posted by denesteak at 11:21 PM