CBR9 #6 and #7: Birth of an Empire and Lords of the Bow by Conn Iggulden

Luckily, a Pajiban mentioned the Conqueror Series by Conn Iggulden, recommending it as a historical fiction alternative to trawling Wikipedia (which is honestly what I would have done.) I downloaded the series in bulk, and got through the first two books during my month-long trip in Mongolia. 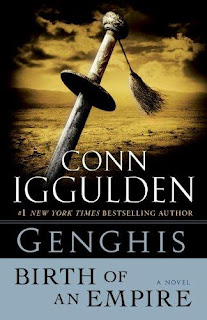 First off, I should say that my photographer colleague who traveled with me on this work trip totally made fun of me for reading historical fiction. "Why don't you just actually read a history book?" he said. "Because it's not as fun," I answered. Honestly, I have such a hard time getting through non-fiction books on current events, I can only imagine my stamina flagging on history books written in a dry, academic way. Why not imbue history with some narrative voice and personal motives? I can totally get with that!

Iggulden's books actually hew pretty close to historical records on the life of Genghis Khan, the fierce founder of the Mongol empire born Temujin. In fact, at the end of each book, Iggulden would go through the events of the book, pointing out what really happened and what he embellished, and it's really amazing to just marvel at some of the incredible conditions that Temujin and his family went through early in his life.

Birth of an Empire introduces the early life of Temujin and his brothers living as part of the Wolves tribe in Mongolia. Always vying for their father's attention, Temujin and his eldest brother, Bekter, grow up competing with each other. Bekter is shown to be the more serious, humorless brother no one really loves, while charismatic Temujin commands respect and friendship quickly and effortlessly. The other younger brothers worth mentioning are Kachiun and Khasar, both easy-going and natural leaders, while the youngest is Temuge -- a chubby boy considered the most weak-willed.

Their father, Yesugei, passes away from an infected wound (that he got from a Tartan tribe seeking revenge) when the boys are just pre-teens, and his first-in-command, Eeluk, takes over the Wolves. Hungry for power after serving Yesugei for a lifetime, Eeluk does not want Yesugei's family to grow up to seek revenge, so he and the tribe leaves them in the harsh grasslands as winter is about to set in.

The period where Temujin and his brothers and mother were trying to survive in the cold were some of the hardest to read because you really got the sense that hunger was just slowly breaking their family apart. Temujin, who was never close to Bekter to begin with, started to hate him deeply as he realized that his eldest brother was hiding food from the rest of the family after their daily hunts. Together with Kachiun, Temujin killed Bekter – a move which breaks his mother's heart, and it drives a splinter in the already suffering family.

When I got to this part, I was already in northern Mongolia freezing my ass off. While I found it difficult to fully understand Temujin and Bekter's hatred for each other, Iggulden's description – along with my experience of Mongolia's winter – made it possible for me comprehend why Temujin and Kachiun would feel like they were driven to commit murder. Bekter was stealing from the family as his mother, who had to nurse a newborn baby girl, and brothers were starving. Mongolia's tough conditions made desperate people angry.

A big part of Birth of an Empire is letting us understand Genghis Khan's origin, of how someone as likable and easy-going as him could grow up to become an ambitious warrior who united all the warring Mongolian tribes, rallying them on to become one of the most feared army in the world. Obviously it will be impossible to really understand Genghis Khan's actual personality, but Iggulden really manages to set up the building blocks of what made him a conqueror. 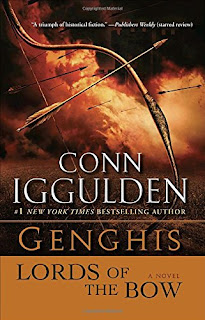 The second book picks up after Genghis Khan has united all the tribes, and is looking southward towards the Chin empire. Genghis Khan understands – from his dealings with the Chin – that the different tribes and the Tartan in the north have been pitted against each other for generations by the Chin so that they will be divided and weak.

Along the way, his coalition had gained a shaman, named Kokchu, a manipulative and clever flatterer who used magic tricks and chemistry to keep an aura of mystery around himself. While Genghis Khan did not really want much to do with Kokchu, he decided to keep him around due to superstition of killing a shaman, and Temuge, the timid youngest brother, went under Kokchu's tutelage.

As Genghis Khan's army moves further south, much of his time is taken up by governing the warring tribes and strategizing on how to bring down the Chin's walled defenses. His two eldest sons, Jochi and Chagatai, have a relationship that seems similar to his earlier relationship with the elder brother he murdered, Bekter. Both vie for Genghis Khan's affections, though he so clearly prefers Chagatai because he believes that Jochi is the illegitimate bastard son that his wife Borte bore after she was kidnapped and raped by Tartans (which happened in the first book).

There are some amazing battles in this book, like at Badger's Mouth, where Chin General Zhi Zhong was convinced the Mongols would never be able to pass. But Genghis sent his brothers to climb the mountains flanking Badger's pass so that when the Chin army was attacking Genghis army at the pass, his brothers' armies also attacked the back. I really felt like whooping when I was reading about the Mongol riders who were able to shoot their arrows with true aim while they were upon galloping horses. Iggulden's books (and I guess history as well) showed that their prowess at archery while riding cavalry was surely the Mongols greatest strength, hence Book Two's apt title.

Once they got to Yenking – which is modern-day Bejing – the city's inhabitants and the royal family were walled in to prevent the Mongols from entering. This lasted for four years before General Zhi Zhong and the young child emperor were willing to negotiate with Genghis Khan. For four years, the Chin had no access to food or crops, and the millions of people within the city started to starve. This made for some truly horrific reading as you could feel the despair of the Chin as they started to cannabalize their neighbors. The young women of the city, knowing that they were going to be the ones who suffered the most once the walls were breached, dressed themselves in mourning white and threw themselves off the walls of Yenking. It's awful to imagine while reading; it's more incredible to learn through Iggulden's notes at the end that this really, actually happened. "Up to sixty thousand young girls threw themselves from the walls of Yenking rather than see it fall to the invader," he said.

The second book kind of threw a curveball at me. I went from rooting for Temujin's survival, to marveling at Genghis' military strategy and prowess, to being just truly horrified at the lengths he would go to propagate the Mongol race as being the most powerful. There are times when Temujin from the first book is recognizable in Genghis of the second book – but those times get fewer and fewer as we near the end of Lords of the Bow.

Posted by denesteak at 2:33 PM