Fine, fine, fine. I'll review some books. I'm really terrible at keeping up with it. 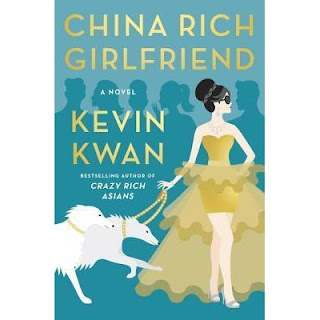 China Rich Girlfriend is Kevin Kwan's sequel to Crazy Rich Asians. Even though the first book was imperfect in many ways, I really loved it because it was sort of the first time I've seen Asians portrayed in an atypical fashion in English-language fiction. I also recognized a lot of my Singapore family in the first book, so I think that helped as well.

That being said, I'm really not as keen about the sequel. Rachel Chu and Nick Young is back, as is Nick's mother, Eleanor. There are a whole host of new characters introduced, while some old faces make appearances as well. The plot is a bit all over the place, and I feel like the book can be divided into two sections. The first section focuses on Nick's estranged relationship with his mother. This was made such a big deal, but all is forgiven once his mother was able to locate Rachel Chu's real father... and then Eleanor Young kind of disappears for the entire rest of the book.

The second half of the book is about Rachel making the acquaintance of her real father, and her step-family. Her father is now a politician, high up in China's politburo, while his wife is distraught at losing her husband to this new mystery daughter. Rachel also tries to get closer to her half-sibling, Carlton, who is very much like one of the "crazy rich Asians".

Meanwhile, there is a sub-plot concerning Kitty Pong, the former soap actress who used to date Nick's cousin. Kitty is virtually unrecognizable in this book, as she has re-made herself, and is determined to make an impression on Hong Kong's high society. But, as she soon learns, it's not as easy as appearing on the society pages. I think the funnest part of China Rich Girlfriend might be when Corinna, a woman born into an old money family who makes a living teaching people what to do to become "high-class," tries to educate her.

All in all, I found the second book to be harder to get through than the first. I honestly don't care much about Rachel or Nick – Kwan writes these two main characters in such a bland way that they are basically like Bella from the Twilight series. In a way, anyone can identify with Rachel's bewilderment when she encounters all kinds of gaudiness and overt wealth because Kwan has written her as a bit of a cipher. In fact, the best characters in his books are the ones who are actually "terrible" people, doing "terrible" things. I feel like I can see more human-ness in their actions and insecurities than in Rachel, who is just bland as hell.

That being said, I will definitely watch the hell out of the Crazy Rich Asians movie when it's out. I really hope they cast more Singaporean actors in it. So far, all the major roles are like Asian-British, Asian-American... which really annoys me, but is certainly interesting in terms of dissecting the racial politics involved when it comes to a major Hollywood movie that is groundbreaking in a way.
Posted by denesteak at 1:13 PM