Cannonball Read #33: When We Were Orphans by Kazuo Ishiguro 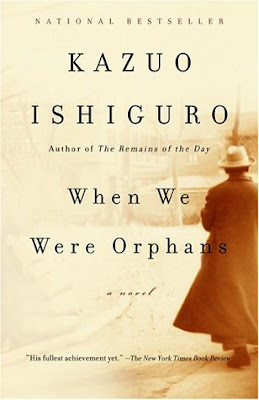 Like Never Let Me Go, Kazuo Isihiguro infuses When We Were Orphans with a sense of measured nonchalance. While reading, I could imagine Christopher Banks sitting across from me and just talking his thoughts out, just him and I having an easy conversation. But his words, the events that he speaks of, are a slow, gradual build up - like he is carefully trying to tiptoe around the real point of his story.

In the beginning, Christopher leads us through his high-society life in London and early success as a detective. He befriends a young lady, Sarah, who is also an orphan. He never talks about the cases that he is solving - there is almost a sense of, "But you already know, so why should I boast about my achievements?" - but fills us in on his childhood in Shanghai. He had moved to England after his father and mother disappeared, and in the second half of the book, he travels back to his old home country, now changed irrevocably by the Sino-Japanese War, to try and find out how he became an orphan.

It certainly says something about Ishiguro's craft that I can simultaneously be bored by his words and intrigued by the meaning behind his writing. I was curious about Christopher throughout the book. He may present himself as a very adaptable and intelligent person, but there are hints offered that this is not a universal perception. Early in the book, an old classmate referred to him as an "odd bird," while another later said that he was a "miserable loner." Christopher took offense to these characterizations because he felt that he had always been able to mimic his classmates in their normalcy.

There was also the impression that if he solved the case of his missing parents, the Sino-Japanese War would stop raging. At certain points, I wondered if we were in some alternate universe and that Christopher was being an unreliable narrator by neglecting to tell his that he was the Prince of England or something. Other times, I thought the other British expatriates were making fun of him and his self-importance by fawning over him and the extremely unlikely return of his parents.

In the end, I'm not sure these things matter. At first, I saw the story as a mystery with the discovery of Christopher's parents to be the end point. Throughout the book, I was disturbed by how his perception of himself and the perception that people had of him seemed incongruent. How could we trust his memories of his childhood and of his parents' disappearance? What is ironic is that his profession brings to mind an image of objectivity; the man has solved many difficult cases and been lauded as one of the brightest minds in London society. Yet his existence - the way he sees himself and sees the world around him - is such a fragment to me. Though I trust that he thinks his version is the truth, I do not believe it is the truth.

Does that even make sense? All I know is that after I finished the book, I was left feeling sad for Christopher. Not because of his parents or his missed chances with Sarah, but because he still managed to hold us at arm's length even after revealing the saddest events in his life. Is this the result of having lost his parents and never quite being able to come to terms with their disappearance? There are no answers about that, and Christopher is more than happy to ignore his unhappiness. However, for me, there remains a sense of a wasted life.
Posted by denesteak at 11:25 PM