Cannonball Read #34: Up In The Air by Walter Kirn 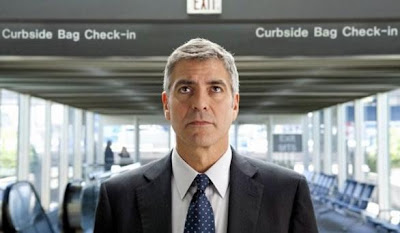 I finished Walter Kirn's Up In The Air in a day and a half. Just zoomed right through, and I felt like I was speed-reading at times. Kirn's writing style made me want to gobble up each following sentence, because all the observations of his protagonist, Ryan Bingham, were sharp and hilarious. I felt like I was getting a peek at 50 different stereotypes in a single paragraph, and I really enjoyed it.

If you've seen the movie, toss it out. The movie is great in its own right (I love the movie even though it depresses me), but the book that it was adapted from is very different. Ryan Bingham is a constantly air-bound corporate flack who is in "Career Transitions" (a euphemism for "He fires people for companies") obsessed with reaching the millionth-mile mark on his frequent flyer miles - that much is the same. However, he has already decided in the beginning that he wants to quit his job and is just using his company to get his last remaining miles in to hit his goal.

Much of the novel deals with his perfect schedule getting messed up or the general feeling that he is being messed with. You don't really sympathize with his frustrations so much as you laugh at them, and then cheer as he adapts to them (either with a swig of liquor or by popping pills). He spouts generalisms and platitudes throughout the book, but does not see that he himself is a stereotype. His fear of commitment and the way he keeps track of his miles only serve to remind us that he is running away from something. Ryan reveals a lot of information about himself, but only a few of them are valuable. It is our job to guess whether if he is sharing or if he is about to throw us a curve ball.

I'm not sure how Kirn managed to get me to root for such a jerk, but he did it. The only person Ryan was nice to (without an ulterior motive) was his screw-up kid sister who was about to get married for the third time. With everyone else, he calculates his advantage, their disadvantage, the possible outcomes - much like he does with his miles and his credit card rewards. Though he is completely screwed up, he knows it. It only took a million miles to figure it out.
Posted by denesteak at 12:44 AM