The Food They Carry 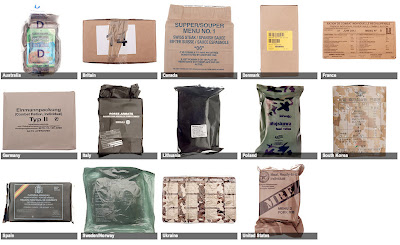 This post is dedicated to Jen K. Stay safe in Iraq.

Ashley Gilbertson – a war photographer who I recognized as Dexter Filkin's colleague in his book, The Forever War (BEST BOOK EVER) – recently wrote an interesting article in The New York Times about the types of food that the troops in Iraq carry. Each country's combat ration hold practical items, but there are also foods that serve to remind a soldier of his home. The American Meals Ready to Eat (M.R.E.) include peanut butter and tortillas; the Swedes and Norwegians have cod stew with sour cream and potato; the Germans have goulash.

Gilbertson also put together a neat interactive where he photographed each country's combat ration and their foods against a lighted-up surface.* I included some of my favorites below. If you have some time, you should take a look at the article and click through the interactive. 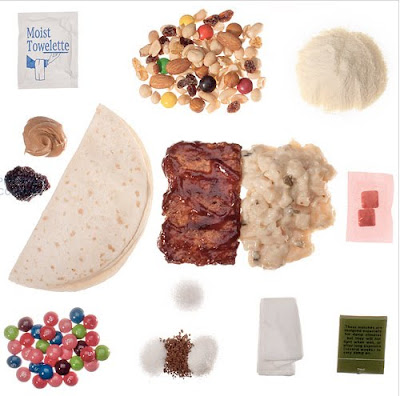 United States - I love that they get skittles. 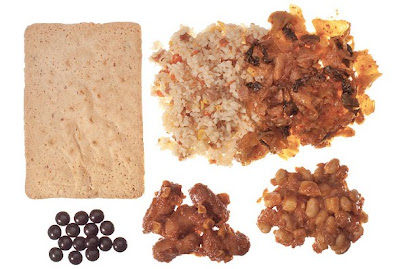 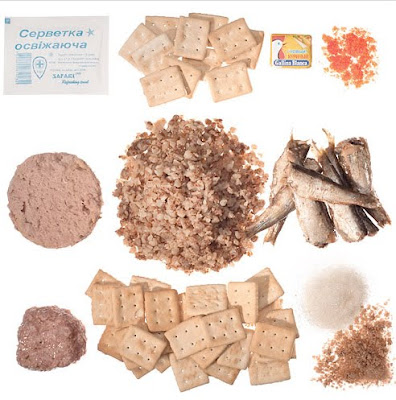 Ukraine - I really liked how bland and drab this country's food looked compared to all the other countries.
Ashley Gilbertson wrote:

In combat, eating is often the only good thing about a day. When a soldier or marine sits down to warm up his M.R.E., he’s not being shot at, he’s not losing friends. It’s almost a ritual, and the very act of opening one of these packages suggests safety, however brief it may be.

*It's sort of reminiscent of what David Littschwager did with his One Cubic Foot project in National Geographic - where he went to different locations and stuck an alloted space of about cubic foot, then took living organism out to photograph them and made it into a photo collage.

All photos by Ashley Gilbertson/VII Network, For The New York Times.
Posted by denesteak at 11:39 PM

Some of the flavors they come up with are a little insane . . . nobody likes the breakfast omelette MRE . . . there is absolutely nothing redeeming about that one, no M&Ms, nothing. I actually really like the tuna one which is a Starkist tuna pouch with assorted goodies.
I never heard about the Charms being bad luck like they said in the article . . . then again, I had to eat more MREs in the field as a cadet than as an actual Soldier. When we go to the field, our cooks usually make hot chow for breakfast and dinner, and I'd rather bring my own snacks than eat the MREs. In Iraq, I was fortunate enough to be on a large FOB with a DFAC (dining facility), and our missions involved driving to other large FOBs with DFACs.
Thanks for the shout out! When my dad was stationed in Germany, he worked with other nations sometimes, and I always loved it when he brought home other militaries' rations. It was fun to explore. I kind of wish ours came with liverwurst like the German ones. I also loved the mini Tabasco bottles that came in his - I thought they were really cute when I was 8 or 9, and included them in with my toys.

Wait, so within each nations food pack, there are also different types of MRE, like a starkist one and a breakfast omelette one (eek... the thought of it being kinda dried = bleh to me)? There isn't just one fixed type of MRE for everyone? Wow.

I really liked that the American one has peanut butter in it, because I remember when I studied abroad in France and Prague, my friends all missed peanut butter terribly (me, I could take it or leave it.)

There are 24 different meals, they come in cases of twelve so there are two different types of cases to supply them all. They also come with cheese spread (you usually get either peanut butter or cheese or jalapeno cheese) which can be good, but everyone always jokes about the fact the MREs have the possible side effect of constipation.